Have you been directly or indirectly been discriminated against or harassed or victimised in the workplace on the grounds of your race?

What is Race Discrimination?

Race discrimination at work is where due to your race, your perceived race, or the race of someone you associate with, you are treated unequally by your employer. The Equality Act 2010 (the “Act”) has deemed that race is a ‘protected characteristic’ and therefore race discrimination is unlawful.

The definition of race under the act includes colour, nationality and ethnic or national origins and can arise in any of four ways:

Racial discrimination in the workplace can occur at various stages from the interview stage, in the promotion and transfer opportunities, when being dismissed or subjected to any other detriment.

If you need help or advice from an experienced Employment Law solicitor, call us on 0800 612 9509 or fill in one of our contact forms. 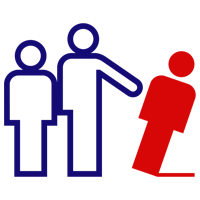 The Act covers all aspects of employment, including:

Race discrimination can occur in the following 4 ways:

A person discriminates against another person by either treating them unfavourably (where that person is treated badly) or less favourably (where other people receive better treatment even though their circumstances are not materially different to that person).

Where discrimination is based upon a person’s race, it is unlawful.

You can be discriminated against racially due to your own race, your perceived race, or the race of someone you associate with.

However, this apparently straightforward position creates difficulties for tribunals. Employers will almost always deny that race had anything to do with the alleged discrimination. The tribunal in this situation has to find the true and effective reason for the employer’s action.

The defence of justification is not available for direct discrimination.

There is no longer a need in Direct Discrimination for the employee to actually possess the prohibited characteristic themselves allowing “Associative Discrimination” as a wholly new concept.

Under Associative Discrimination, the victim of discrimination does not need to possess the protected characteristic of race. For instance, a person who received less favouranble treatment from their employer because their adopted brother is black, would be covered.

Direct Discrimination also covers discrimination by perception. That is discrimination because of an employee’s perceived characteristic. For example, an employer rejects a job application from a white woman who it wrongly thinks is black because she has an African sounding name.

Indirect race discrimination is where a policy is operated by an employer which, at face value, is not related to race in any way but its subsequent effect is to disadvantage ethnic minorities.

When an employer applies a policy that applies to all workers but which:

An example of indirect race discrimination would be where an employer has a policy that requires all male members of staff to be clean-shaven, which puts members of certain religious group at a disadvantage.

Indirect race discrimination can be objectively justified by an employer but they must be able to prove that the reason for the discrimination is a “proportionate means of achieving a legitimate aim”.

However, the legislation provides for specific situations where race discrimination is justifiable in the employment field in relation for example to actors, models, personal welfare services and jobs where food or drink is provided and a person from a certain racial background is required for authenticity.

Dean took on my case on a no win no fee basis . The service throughout has been excellent and I’m extremely happy with my settlement!

Dean is top class,help me every step of the way always there with any question I had and got me the best result highly recommend

The service was absolutely brilliant.Dean Morris is awesome he took on my case on a no win no fee basis in a time of despair in a legal matter against two giant cooperates and got me the result I wanted . I am grateful for the excellent work he has done on my behalf and I would definitely recommend him and his legal team

Race harassment is the unwanted conduct related to race or ethnic or national origins which has the purpose or effect of violating a person’s dignity, or creating an intimidating, hostile, degrading or humiliating or offensive environment for a person.

Conduct shall be regarded as having the effect of violating someone’s dignity or creating an intimidating environment only if in all the circumstances, including the victim’s perception, it could reasonably be seen as having that effect.

This means that the definition of race harassment has the scope to include most types of harassment including:

However, in some cases the concept of the victim’s ‘reasonableness’ may make it difficult to win such cases.

Even where the harassment is not directed at the claimant personally it is possible to make a claim. For example, a black employee can claim under this heading if he has witnessed and been offended by the racial discrimination of an Asian colleague.

Harassment by third parties is now included in an extension to the law under the Act. This means that now employers will be liable for harassment on the basis of their employees race by clients, customers, suppliers or patients in some circumstances.

If your employer knew, or should have known that you have been harassed on at least two previous occasions during the course of your employment by a third party (not necessarily the same form of harassment or even the same third party on each occasion) and failed to prevent it from happening again by carrying out reasonable steps, then they may be liable under the Act.

Race victimisation is where an employee is treated less favourably as a result of them trying to make, having made or helping another employee to make or assumed to have made, a complaint or grievance of race discrimination under the Act.

Unlike the other types of discrimination there is no longer a need to compare your treatment to an employee who has not done one of the above.

If you are looking for a No Win Fee Employment Law Solicitor to represent you, we need to assess the merits of your potential claim which we are normally happy to do free of charge.

TAKE THE NEXT STEP

Who is liable under the Act?

The liability usually lies with the employer and/or any other employer who is found to have discriminated on the grounds of race.

As mentioned previously employers will also be liable for the discriminatory acts of third parties such as clients, customers, patients or suppliers in certain circumstances.

It is usually wise to bring the employment tribunal claim against both the employee as well as the employer where the acts complained of are done by another employee.

It is down to the person making the claim to establish that the discrimination occurred. The employee has to prove ‘on the balance of probabilities’ that they were discriminated against by the employer.

This means that, whilst a tribunal may have doubts as to whether or not the employer discriminated, as long as the tribunal more than half believes that they did in fact discriminate they must decide in favour of the employee.

Whether or not race discrimination can be proved often depends on what inferences a tribunal can draw from the primary facts of the case.

For example: Where an employee complains they failed to gain promotion on racial grounds the evidence may point to the possibility of racial discrimination. In these circumstances the tribunal may look to the employer for an explanation that proves there was no such discrimination.

Should I raise a grievance?

If you are still in employment it is best to lodge an internal grievance first if you are unable to resolve the matter informally with your line manager. Your employer will then be obliged to convene a meeting without reasonable delay to discuss your grievance.

If you have already been dismissed and believe you have been discriminated against you should lodge claims for unfair dismissal and race discrimination at the Employment Tribunal.

What kind of compensation could I be due?

If you are successful in your claim, any damages are uncapped and represent any monetary losses suffered in terms of wages, pension rights, perks etc.

A tribunal may also award compensation for injury to feelings.

Three bands of compensation guidelines have been set out by the Court of Appeal for injury to feelings dependant on the serious of the case.

These are commonly known as the “Vento” guidelines.