What is Gross Misconduct?

The most common examples of gross misconduct include:

The expected process is outlined in The ACAS code of practice and if the correct process isn’t followed and you lose your job, you could claim for unfair dismissal.

According to the ACAS code, the process is as follows:

You could be facing a suspension with full pay if you are facing a gross misconduct allegation, pending investigation. 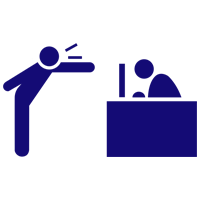 Dean took on my case on a no win no fee basis . The service throughout has been excellent and I’m extremely happy with my settlement!

Dean is top class,help me every step of the way always there with any question I had and got me the best result highly recommend

The service was absolutely brilliant.Dean Morris is awesome he took on my case on a no win no fee basis in a time of despair in a legal matter against two giant cooperates and got me the result I wanted . I am grateful for the excellent work he has done on my behalf and I would definitely recommend him and his legal team

What Is An Investigatory Meeting?

The purpose of an investigatory meeting differs from a disciplinary meeting, in that it is used to gather available facts. Therefore it is not part of the disciplinary process as such, however you will be able to clarify any matters of concern and explain your conduct. Based on your response, the employer will then decide if disciplinary action is necessary or whether further evidence is required – leading to a second investigatory meeting.

How much notice should you be given prior to an investigatory meeting?

According to the ACAS guidelines, “‘the meeting should be held without unreasonable delay whilst at the same time allowing an employee reasonable time to prepare their case”. There is no strict definition as to what constitutes as “reasonable” as it is entirely dependant on the case itself. With that being said, 1-2 days notice isn’t usually deemed “reasonable”, with 5 days notice being adequate notice.

How should your employer conduct an investigation?

How will an employment tribunal decide if gross misconduct was a fair reason for your dismissal?

When considering whether dismissal was fair, a tribunal will take various factors into account, including:

The most fundamental aspect, even though all of the above points are important, is whether your employer had reasonable grounds for believing, and genuinely believed, that you are guilty of the misconduct at the time and that adequate investigation was carried out at the time of those beliefs. This is otherwise known as the “Burchell test”.

In order to constitute as reasonable grounds for the belief, your employer must have:

Please note – an employment tribunal does not have to consider whether you were actually guilt of the misconduct or not – but whether your employer had reasonable grounds for believing that you were guilty.

Does your employer have to dismiss all employees who have committed the same misconduct?

This depends on any variation of the circumstances of the various employees. If there are no differences in the circumstances, a tribunal would need to consider whether if was reasonable or not for one employee to be dismissed and not the other. It is generally difficult for the employer to give sufficient reason as to their inconsistency.

Is resignation a good option if you are facing a gross misconduct allegation?

It’s natural for you, when you are first facing a gross misconduct allegation, to:

The question of whether you should resign prior to being potentially dismissed is one that is often asked. The matter of fact is that resignation will often be construed as guilt by your employer. You are also forfeiting your opportunity to defend your position or make any appeal against dismissal. Not only this but you are potentially putting yourself at risk if in the future if your employer decides to disclose to any future employers that you resigned after facing a gross misconduct allegation and any pending disciplinary proceedings.

A resignation could still be a better option, despite the above, if your employer has raised an unsubstantiated allegation of gross misconduct. You will have to show that you are in an impossible situation to be able to continue your employment and that it has severed the confidence and trust between you and your employer, effectively resulting in a constructive dismissal claim.

If, however, you decide to remain in your employment for the duration of the disciplinary procedures and you are still dismissed, you could potentially proceed with an unfair dismissal claim instead.

It is at this stage we strongly urge you to seek professional advice, as the decisions you make will have a significant impact on your current situation and your future employment.

Is it easy for an employer to prove Gross Misconduct?

The employer doesn’t need to provide absolute proof of gross misconduct to start proceedings. Your employer can take disciplinary action if:

Should I resign if I am accused of gross misconduct?

If you have been accused of gross misconduct at work and there is sufficient evidence against you, then it’s natural to want to resign rather than continue with procedure. In some circumstances, resignation can be the better option, however you will have to weigh this up against the fact that your resignation may be a strong indication of guilt. Your employer can also still continue with the gross misconduct proceedings during your notice period.

If you are looking for a No Win Fee Employment Law Solicitor to represent you, we need to assess the merits of your potential claim which we are normally happy to do free of charge.

TAKE THE NEXT STEP